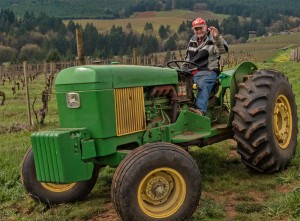 In 1959, Jim and Loie Maresh drove from their home in Portland to Yamhill County, looking for a house with a view. They found a 27-acre hilltop orchard for sale outside Dundee and when the owner wouldn’t sell them the house with a view lot, they bought the entire property. And this is how they became farmers.

Jim, a business analyst for Dun and Bradstreet and Loie, a teacher with two masters degrees, knew nothing about farming. But their neighbors taught them what they needed to know and on weekends and at night, they and their 5 kids grew hazelnuts, cherries, and prunes and thoroughly enjoyed their lives at the top of Worden Hill Road.

Jim and Loie developed a fierce attachment to this agricultural community and many of their neighbors, sensing that the Maresh’s would protect their land, sold them their farms when they were ready to get off the tractor. Eventually, the family farmed 225 acres in the Dundee Hills and still own most of that today.

One of Jim and Loie’s neighbors, Dick Erath was starting to grow grapes and make some wine and Jim thought that would be a great idea. In 1969 the first vines arrived and in 1970 Jim and Loie planted the 5th oldest wine grape vineyard in Oregon.

Decades later when Jim and Dick Erath were reminiscing about those early days, Jim told Dick how grateful he was that Dick was around to guide him only to learn that Dick didn’t really know what he was doing either.

Loie passed away in June of 2000 and I never had the pleasure to meet her, but when Donna and I first moved here almost everyone of our neighbors told us about her and how she was the heart of the Dundee Hills.

If you spend time with Jim Maresh he will tell you the history of these hills and the early days of this industry – about how banks wouldn’t lend money to farmers to grow wine grapes, but they would lend money for diesel so that’s what he did. He will tell you how many of the first meetings of the nascent industry took place at his and Loie’s home where they shared camaraderie, information, and helped one another.

In the 1960s, developers tried to turn the hills in to suburban homes. In fact, when Donna and I bought our vineyard in 2006, the map we received from our Title Company, still showed the property platted for a subdivision. Jim, Loie and their neighbors went to the county commission and eventually were able to protect the area for agriculture.

In the 1970s, new land use laws were brought in to being and in 1973 the Dundee Hills were designated Exclusive Farm Use.

In the late 1970s and early 1980s an attempt was made to change the zoning of quarries to allow the production of asphalt. The Maresh’s and their neighbors were afraid their grapes would absorb the smells and chemicals from the asphalt and went to the county commission again for protection. The county ruled against them.

The neighbors, the Webers, Stevens, Lett, Archibald, Bauers, Erath, and Maresh families along with strong support from 1000 Friends of Oregon, appealed to the Land Conservation and Development Commission (LCDC).

On the day of the hearing, the small band of farmers and their supporters arrived to find the room filled with television cameras. They were there for the hearing to follow but it added to the sense of importance of the issue. Fearing that their attorney’s arguments were not having an effect on the commission, Jim, without any remarks prepared, took the stand. If you’ve ever had the chance to sit with Jim for a while, you know he is a vivid and passionate story teller. At the core of his argument, was a point we still make today, Do Oregonians want agriculture in these hills or do they want industry. LCDC decided in favor of agriculture. Later, one of the commissioners confided that prior to the hearing, the votes were in place for the asphalt batch plant.

Yamhill County appealed the decision and Maresh et al vs. Yamhill County wound up in the Oregon Court of Appeals. In 1984, the court upheld the LCDC decision to protect farming. A year later, another threat appeared on the horizon and Jim and his neighbor, the late Arthur Weber, brought their entreaties to an Oregon State Senator who proposed the Weber-Maresh Amendment to the existing land use laws barring the production of asphalt on EFU land within two miles of a vineyard. I can tell you that the OWA has used that amendment within the last two years to protect a vineyard.

For all these reasons, and more it is my honor to present this year’s Founders Award to Jim and Loie Maresh.