Hi Jean – thank you for all your work for showing the seasons of the farm.

Harvest 2015 started with pruning the vines in mid-January…. I might have two weeks from not having my crew (and making hot chocolate, burritos….) until the single shoot selection begins in mid-April. Here we go, again, and again… cutting off suckers from the ground, single shoot selection, catch wires raised, cleaning of heads of vines, and then seeing grape set. Growing tomatoes is easier! And just as risky!

Now we are in late March but the early days of March, with it’s sunshine and knowingly early spring gave us the need to make certain that all the vineyard work of pruning and tying and catchwires lowered down were finished this month. The emerging buds of the Chardonnay vines are more pronounced in their arrival, and the Pinot noir buds are just a little less emerged. I can see, already, the second buds from the primary first shoots, but we have to wait until early April to make sure that the first shoots will become our harvest of 2015. It’s an early spring. 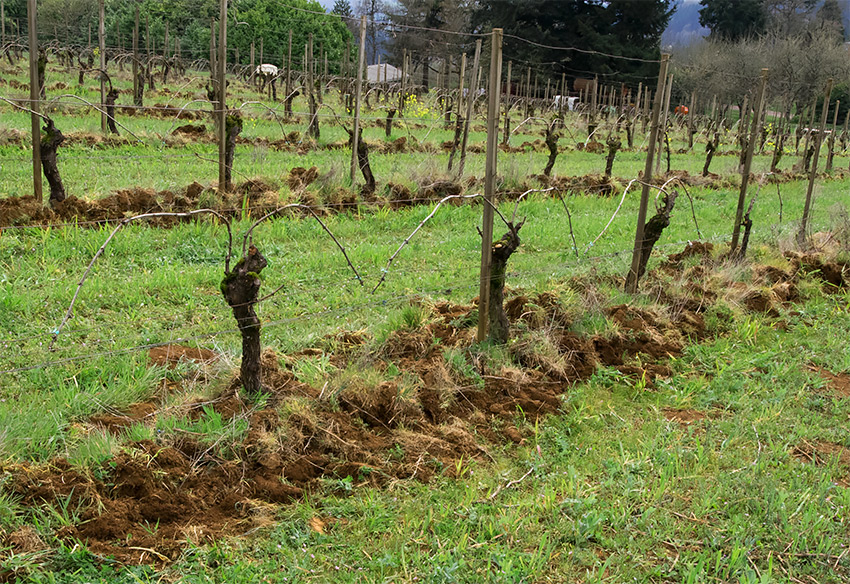 “Soil is alive” says Jim. In order to grow the best vines it must be treated as such. He sees soil as a “micro-population.” If you protect your soil, keep it healthy and strong, then your crops will be the strongest, immune to many attacks. The Maresh farm is on 12 feet of clay loam. “The soil is down deep, so the roots need to run deep too!” He freely admits that his style of farming might not work on different ground, but for the Oregon red clay of the Dundee hills, his system is perfectly suited.

Jim has what is called a “dry farm.” There is no irrigation for his vines, no watering that occurs aside from what happens naturally. Because the roots are set way down in the deep soil, they draw water from the winter and spring rains and from any water stored underground.

Jim also keeps his vines spaced out. He uses California spacing of 6’x12′. He also only plants 600 vines per acre rather than the more common 1000/acre. He likes the air and the drainage that more space provides. The exposure to air and sunlight helps make his grapes some of the best Oregon has to offer. Why crowd the vines together? Give them space and let them grow!

He is careful to always have a cover crop put in by April 10th each year to protect the moisture retention of the earth. Martha remembers that as children, she and her siblings made forts and mazes in the five foot high red clover growing between the rows. Dry farming is the system that he cherishes. Jim is slightly dismissive of the fancy irrigation systems many new vineyards are so quick to install. “All it takes is a little faith in the hills and care of the vines to be sure that the roots are deep enough to stay strong,” says Jim.