Summer Towards Harvest at Maresh Vineyard

8/19/2014
Dear Jean – yes, it’s been a hot August but all the Pinot noir vines are starting to show color and the Chardonnay, of course, are still vibrant green with long clusters. I still think we’ll not harvest our old vines (40 years) until the first weeks of October but getting ready for the first harvest of young vines from neighboring vineyards come late September… or earlier. Have made plans for wooden fermenting bins from Mid-Valley workshop for another truckload of bins so besides making sure all the picking buckets, shears, gloves and harvest bins are ready to go then so are we! The 20″X 30″ white tent comes up here in mid-September with enclosed sides so once the Pinot goes into fermenting bins they will all share that space… slow fermentation… and the heady aroma of those fermenters in the enclosed tent gives us a scent, a whiff, of harvest and wines of 2014.

Finishing the last of vineyard work today – a few more leaves off one side of a special block on the farm before the last of organic spray tomorrow – and have a pot of black beans on the stove to make sure that our tractor guy gets another burrito early in the morning to thank him for getting out here/there before it’s too late in the morning. Vineyard work is settling down… now time to get ready to bring in the new big (!) press and get ready for harvest with grapes, grapes, and grapes…and make wine. Another vintage!
– Martha

below, Jim punching down in the white tent, October 2013

8/6/2014
Starting to take care of harvest 2014. Have been busy with getting enough red wine barrels for this years harvest that Jimmy is responsible for picking up tomorrow from local wineries. Good connections and good barrels and good folks to talk to… harvest, yes, but now focused on winemaking needs. Barrels, bungs, barrel racks. Yes, the wine is made from the vineyards but having all the right equipment (barrels, bungs, and barrel racks…the three B’s) make a more smooth harvest/winemaking. Vineyards are so full of fruit – lower, old vines will need a little cluster dropping to keep tonnage down to old vine ripening but that’s what makes Maresh fruit and wines reflect their flavors in their own vintages. 2010, 2012 – low fruit from old vines – 2011, 2014 – hearty fruit from old vines – and we will be selective in what we harvest for 2014. 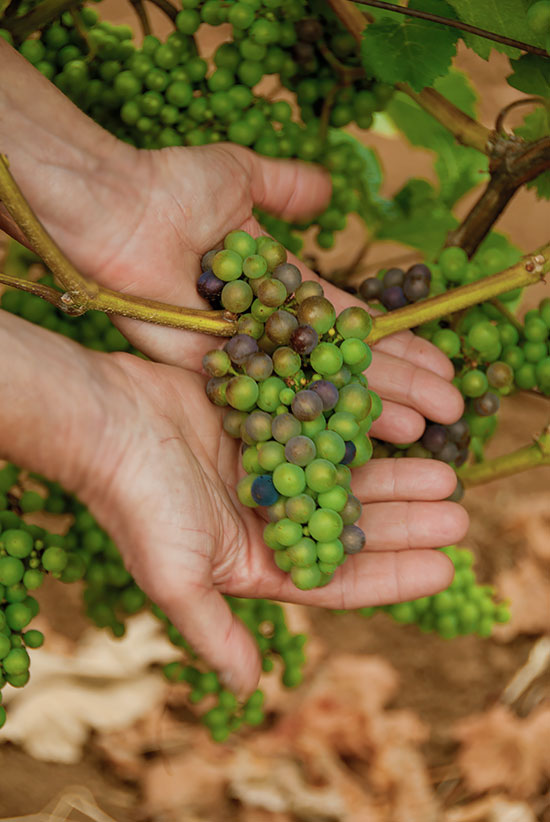 Mother Nature always keeps us on our toes and feet and boots…January through November. But harvest in September though October is now my focus… finish with August’s last vineyard jobs…last of the light leaf pulls and then getting the bins, buckets, shears, and gloves ready for our small group of family helpers who have been with us for 30 years. I think it’s going to be late September for our old vines of Maresh Vineyards and through mid-late October but some lower old vines might come up to the winery sooner. Ready to go! Soon!
– Martha

7/19/2014
Hi Jean – Today Dad called needing Steven for a little tractor help – he’s decided to get the John Deere crawler out for some farm work – so Steven went down to take off the big bucket/blade and Dad (88 years) gave the tractor a “trial run” and him, too, pushing out some blackberry brambles below one of the lower vineyard blocks planted in 1970. All went well but Dad has his new way to on and off the crawler but Steven is now designing a bolted step to the tractor so Dad can more easily climb it in case of off/on in the middle of a vineyard block.

Our vineyards are now in a slight pause of mid-summer. All side laterals are pulled from the morning’s east side and the tallest of tips are hand macheted closer to the highest trellis wire. The clusters on some of old Maresh vines are long and hearty, again, like 2011, which means some blocks might have to be slightly thinned but not until verison when we can see what clusters are ripening ahead of other clusters and we’ll glean out the greenest for the potential ripest clusters. I am thinking, again, of what I can do with this dropped green fruit…a fresh body scrub comes to mind.
– Martha 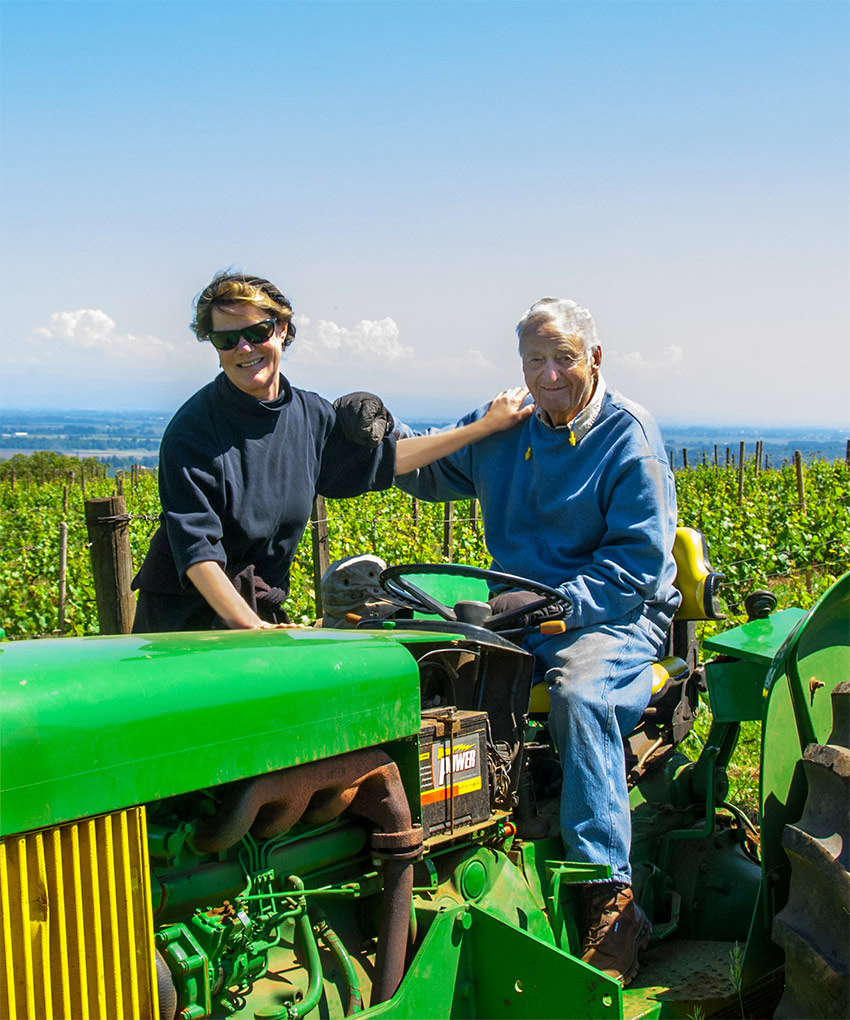 7-16-2014
Yes, the vineyards are slowing down through these hot days of July. Had the small crew remove a few leaves around the clusters on the east side of the old vines for more air flow but leaving west side still shading clusters from the hot west sunshine. Letting dandelions grow between the rows as too dusty to disc them into the ground and no need until some rain… no moisture stress on vines as these are non-irrigated and the old vines have sought the water deep from the aquifers for many years so the leaves and clusters show no stress from the hot days of the past two weeks.

The vines have now been finished with the east side leaves lightly pulled and the lateral canes removed and the remaining long canes that bear the clusters woven between the three catch wires. Getting ready for harvest 2014.
– Martha

7-1-2014
Dear Jean – just finished sending off Jose who has been plucking leaves lightly off the east side – this time the Wadensvil Pinot beside the walnut orchard on the farm – the L O N G rows – and while I make sure my crew has lots of cold water and burritos for the day and lunch it was just Jose, today, so it was fun for me (all hot and sweaty, too!) to send him off with a glass of cold water with ice cubes and a blueberry ice cream cone (with fresh blueberries atop) that I poked in his big front pocket so he couldn’t politely refuse and as he changed his boots to his driving shoes I saw that he was enjoying the ice cream treat. He’s only driving 20 minutes away but the cold water and ice cream cone will make his drive on asphalt more comfortable. 5:30 tomorrow morning we’ll start again – this time back in the old Maresh vineyard of #3 and #4 (Pommard and Wadensvil – 1971) as they are ready for the first pass of a light machete. Not for looks but for energy now directed to those bountiful clusters that hang thick from the arc canes of these old vines. Stay cool and I suggest a blueberry yogurt ice cream cone for you, too! (I think I’ll put a bit of Prosecco on ice and chill out, too!).
– Martha

below, just about every Friday morning in the summer, hot air balloons over the valley, seen from Maresh Vineyard 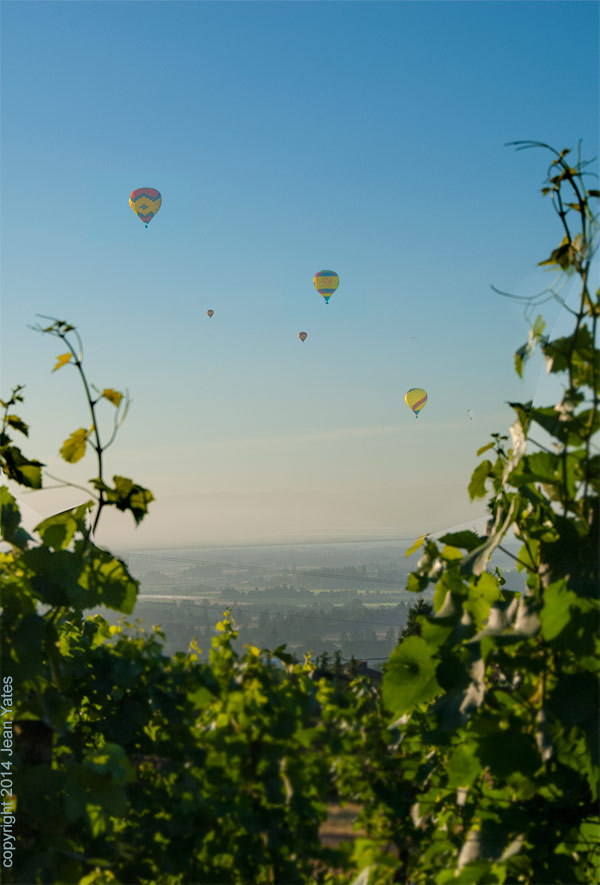